Are We In a Stock Market Bubble? 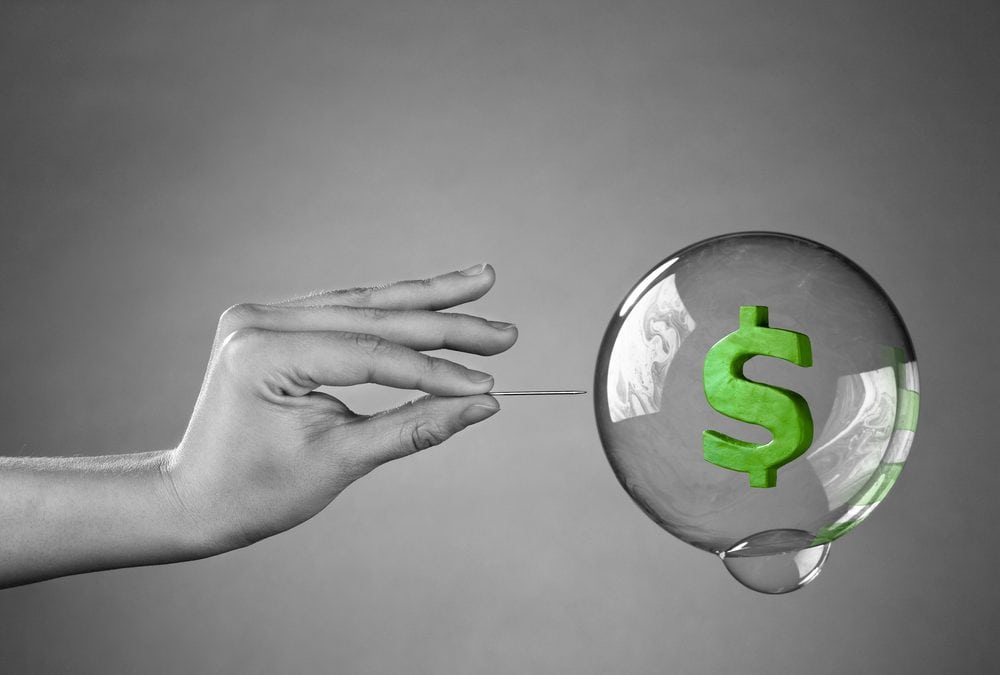 I am now more convinced than ever that we are in a stock market bubble.

I will offer what I consider “proof,” but first let’s get a few things straight.

1. The Stock Market is a Very Real Game

Here’s what I mean.

The stock market is a very real mechanism for funding public companies. Public companies sell stock to fund their operations. When you buy a stock, you are buying a stake in a company. You are paying for R&D, product manufacturing, employee expenses, and so on. This is as real as it gets.

That said, almost anyone is free to invest in the market, which means the market is not necessarily rational. It is a game of speculation. People can bet on their favorite companies without any regard for financials, business considerations, or rationality. In this sense, investing is becoming gamified (especially with the increase in accessibility).

While many believe the market is efficient, it isn’t. There is no rule stating that companies can’t be wildly overvalued or undervalued nor is there any regulating force that returns companies to realistic valuations. The public determines value, and the public is often wrong.

2. The Stock Market IS a Reflection of the Economy

Many people dismiss irrational market behavior with the following statement:

“The stock market is not the economy”

I’ve heard this claim more than ever in 2020 as the market raced to new highs to the tune of record unemployment, global pandemic, and unprecedented economic disruption.

The statement is both true and false.

The stock market is not reflective of the entire economy, but it is representative of a part of the economy. There is a correlation, and separating the two is foolish.

Look no further than the 2008 recession. The economy was in a recession and stocks suffered.

I challenge you to identify a time where the economy was in shambles and the market was in a sustainable upward trajectory.

Do certain companies thrive under economic recessions? Of course. But as a whole, the market suffers.

Common sense goes a long way in this analysis. If the economy is suffering, people have less expendable income, they spend less, and companies make less money.

Amateur investors tend to miss a key factor in their financial “analysis.”

They focus on companies and neglect valuations.

Here are some examples of statements that are seemingly true, but incomplete as investment theses:

These hypotheses are not unrealistic but (the validity of the speculation aside) they are incomplete.

For the sake of argument, let’s assume we all agree that Tesla is an excellent company that will be around for decades to come. We are bullish on Tesla’s business model. The next obvious question is, “how much is the company worth?”

This is the question that most amateur investors fail to answer. We could probably agree that Tesla is worth more than one million dollars and less than one trillion dollars, but, what is the company’s true value?

This may be an afterthought to investors who just want to throw cash at hot stocks, but it’s a very important question to answer. We go through this valuation process with every other purchase we make. For example, if the latest iPhone is on sale for $100, we know it’s a steal. If it’s on sale for $10,000, we know it’s a rip-off. A product’s quality and price need to be aligned – that’s economics 101.

This is glaringly obvious with tangible products, however, stocks are intangible so they can be harder to value.

Stocks may be able to coast on unrealistic valuations in the short-term, but reality always sets in. I can name dozens of unprofitable “start-up” companies that currently boast multi-billion dollar valuations, but I can’t name any that have maintained those valuations for decades.

While realistic valuations may not matter when the market is emphatically bullish, there will come a time when they do. When stock prices start dropping, companies need strong fundamentals to fall back on.

If you ignore fundamentals, you may be left holding the bag.

The bull market run of 2020 caught most investors off guard. In March, the talks of a “v-shaped” recovery seemed preposterous, and now the market is setting new highs.

I’ve seen many different analyses (both bullish and bearish), many of which are overly complicated. These analyses look at options flow, market sentiment indicators, advanced economic models, and other frivolous metrics.

In reality, business isn’t that complicated. Companies’ valuations are determined by the companies’ current revenues and expected future revenues. Everything else is noise.

I’m not going to bog you down with overly complex analyses. We can do a simple, “common sense” analysis of the current market conditions to show that companies are becoming overvalued and will eventually return to reality. We will simply look at stock prices and company sales to determine whether or not companies are appropriately valued.

Of course, we don’t have the time to look at every company, so we will look at a few that are reflective of how investors seem to be approaching investing in the second half of 2020.

Below is a chart of Apple’s performance over the past five years: 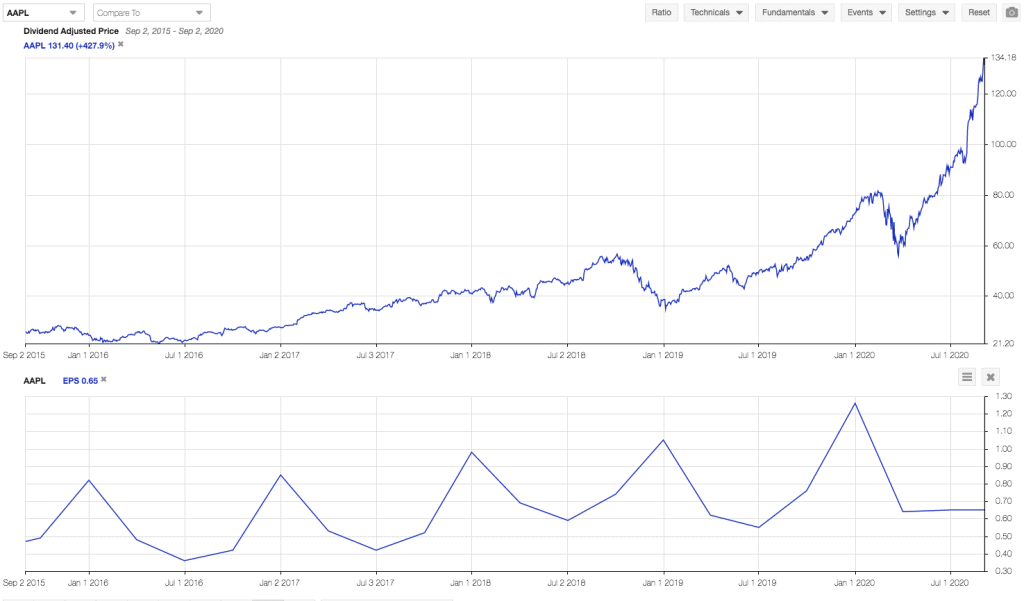 Apple stock price is up over 500% during this period, but earnings remain about the same.

Here are the earnings-per-share broken down by year:

While Apple’s stock price is up over 500% while annual earnings are only up ~30%.

Apple’s Price/Earnings ratio is now ~40 compared to the industry average of ~20.

It should be noted that Apple isn’t some early-stage company set up for explosive growth. It’s the biggest company in the world. The company will need to double its sales to grow into its current P/E ratio.

Here is Apple’s revenue for the past 5 years (in millions):

Do you see them doubling sales any time soon? I don’t.

One note before we move forward:

I understand P/E ratios aren’t the only way to value a company but a company does have to justify its stock price with sales. Try thinking about the “value” or Apple with a real-world example. Your friend runs a company that steadily makes a profit of about $100,000/year. He values the company at $4 million (40 P/E) and asks you to pay $2 million for 50% of the company. Assuming profit distributions were made annually, it would take you 40 years to recoup your initial investment and even longer to turn a profit ($50,000/year * 40 years) = $2 million). Would you take that deal? I wouldn’t…

Tesla is another company that has a runaway valuation. While this is likely due to a short squeeze combined with short-term momentum, there are still investors who think Tesla is a good value right now.

Just to put things in perspective, this is Tesla’s stock price compared to its market cap (i.e. company value): 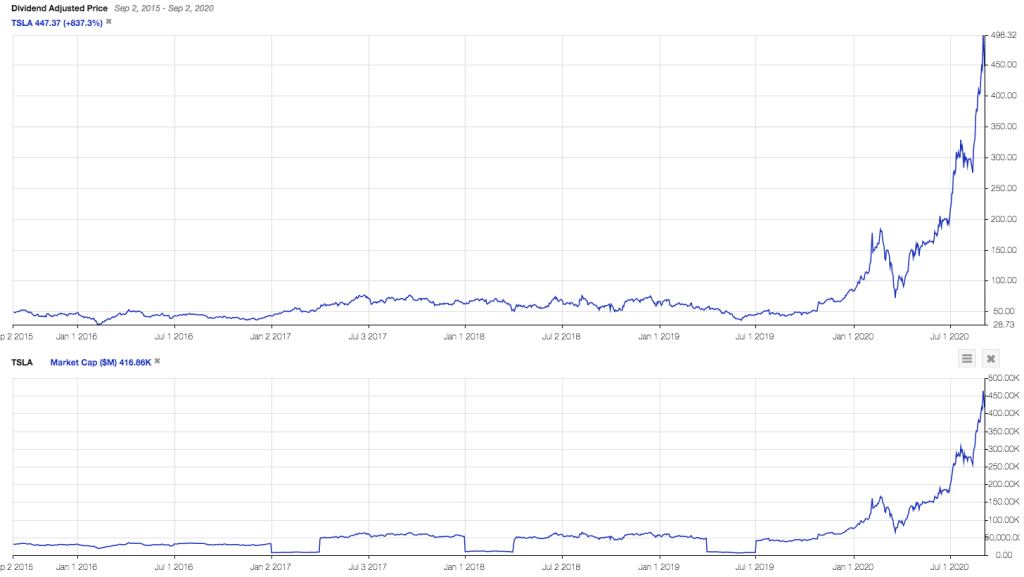 Tesla is worth over 400 billion and they are just now starting to turn a profit. Here is the company’s EPS for the past five years:

In the past year, the company has started to become more profitable. It now has a positive EPS of $0.39, which implies a P/E ratio of 1159. The average P/E for car companies is 15 and the average P/E for tech is 20 (if you want to consider Tesla to be tech).

If Tesla wants to grow into its current valuation, it would need to increase annual sales by over 6,000% while maintaining the same share price.

Do you see that happening in the near future? I don’t…

Here is the company’s revenue over the past five years (in millions):

NVIDIA is another example of a company with a runaway valuation.

Look at the chart below which shows NVIDIA’s stock price and P/E ratio: 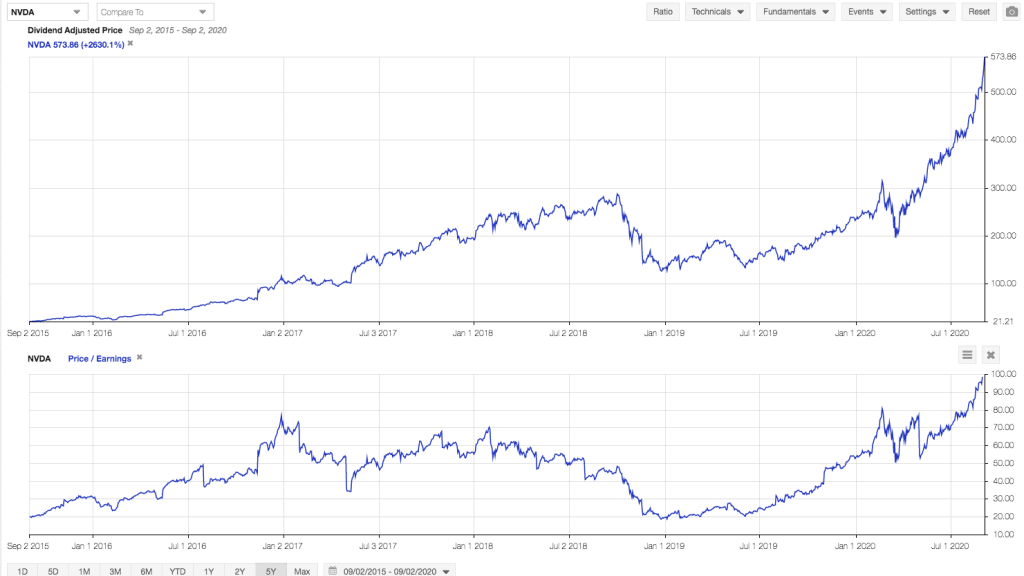 The graphs are almost identical, which means that NVIDIA’s stock price is the main driver of the fluctuation. If the earnings were growing at the same rate as the stock price, the P/E chart would be a flat line.

If you think this phenomenon is limited to a few tech stocks that make up a large percentage of the S&P 500’s weight, think again. It’s apparent in many industries.

They must be killing it, right?

In June, Chipotle posted its worst quarter in years:

Does that strike you as a buying opportunity?

In the past five years, Home Depot’s stock price has nearly tripled.

Revenues$ have gone up about 30% during that time. 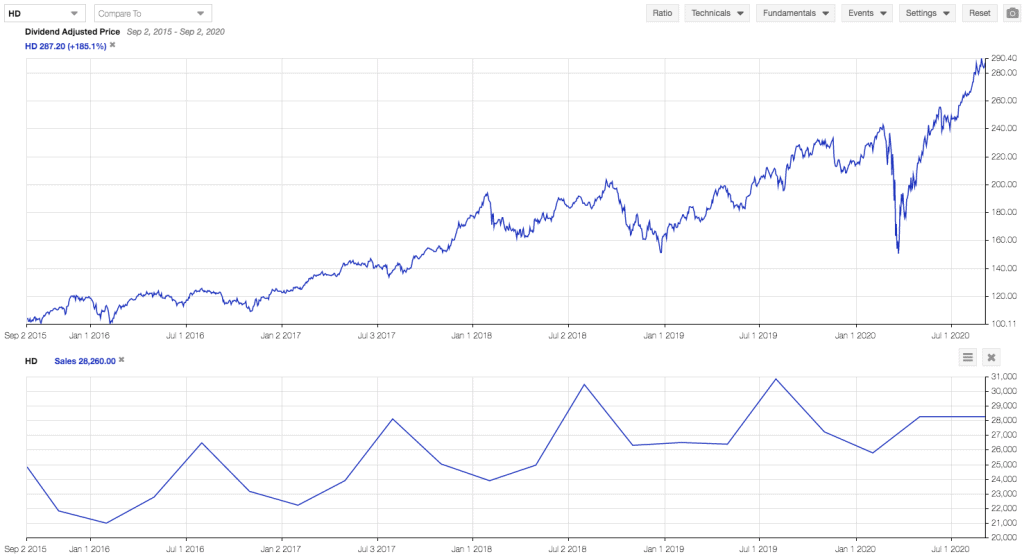 Here are the revenue numbers (in millions):

This isn’t one of the more extreme runaway valuations, but I certainly wouldn’t want to pay a premium for Home Depot in the current economic environment.

We’ve covered just a few stocks that have runaway valuations.

You can find issues with runaway valuations throughout the entire market. Just look at the P/E Ratio of the S&P 500:

Look what happens any time the P/E gets too far from the mean:

There tends to be a regression to the mean.

Any time the P/E gets above 25, we see a bear market or correction proceed. On the chart above, we can see a clear case of runaway valuations around 2000 and 2008.

Anything familiar about those dates?

Ah, right. The internet bubble and the recession.

Why It All Matters

So, why does it matter if stocks are “overvalued”? Can’t they go on this way for years?

Of course, they can.

I’m a firm believer that the market is always right. That said, “Right” doesn’t mean rational. As John Maynard Keynes said, “the market can remain irrational longer than you can remain solvent.”

The point being – you never want to fight the market.

That said, runaway valuations and market inefficiencies are bad news for everyone.

They leave investors exposed to a lingering risk factor. While the market’s bullish momentum may continue indefinitely, someone will eventually be left holding the bag.

Do you want to be holding companies that are trading at 40x-100x forward earnings? If you do, you better have a damn good reason.