Option Alpha Review – Is the Subscription Worth It?

Option Alpha is an options trading platform started by Kirk Du Plessis. The site covers a broad swath of options trading strategies, but the site is mostly focused on the more quantitative based spread style of options trading, as opposed to something more directionally-minded like buying long-term LEAPS.

Rather than selling training courses for a one-time cost, Option Alpha runs on a subscription model with two paid tiers. Instead, the site offers a vast array of courses for free as funnel to generate more paying members.

Who is Kirk Du Plessis? 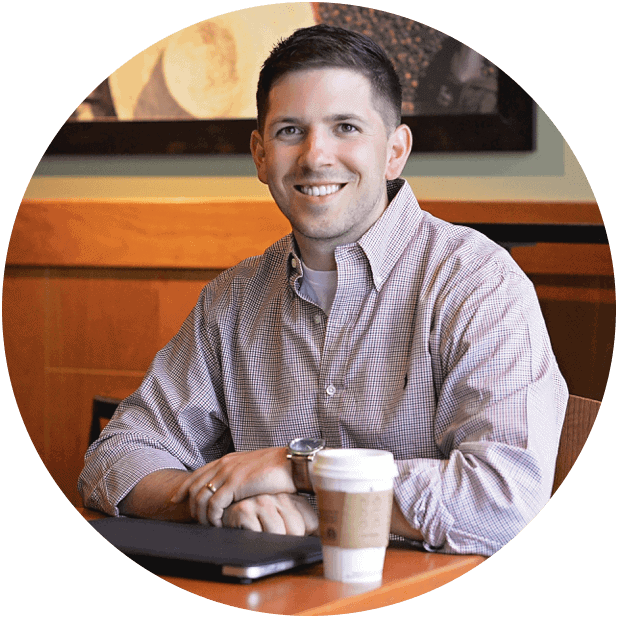 Kirk started his career finance not as an options trader, but as an investment banker working on M&A deals at Deutsche Bank. Later, he moved onto BB&T Capital Markets, where he worked as a REIT analyst. Given his resume, it’s safe to say that he knows the markets pretty well.

Kirk’s dream of becoming a full-time trader started when he was working on Wall Street and trading his own account on the side. This lead him to start a blog and write about his trades and the markets in general. After a conversation with Pat Flynn of Smart Passive Income, Kirk was convinced to create some paid training courses, which lead to the transformation into the subscription-based business that he runs today.

Kirk and his team at Option Alpha are transparent about their trading track record, with a page on their website dedicated to tracking their performance and various metrics like which trades perform the best, and their probability of success on a given trade. 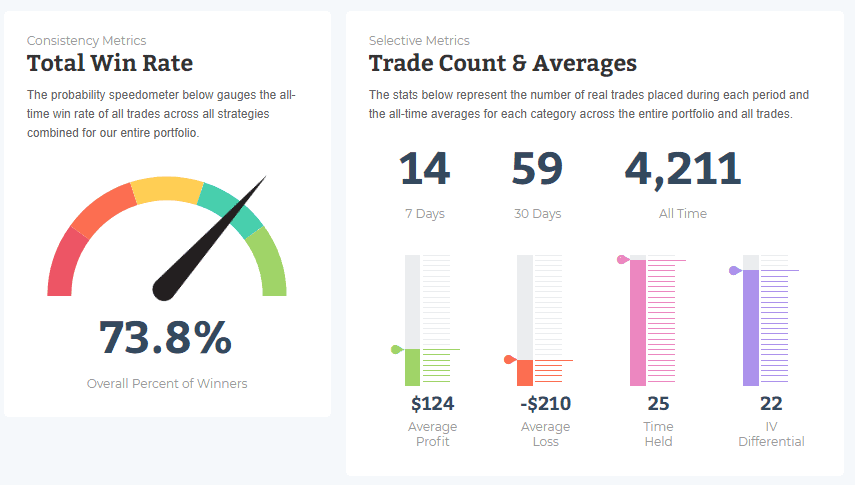 Over a sample size of 4,211 trades, Kirk has an expected value of $36 per trade. If the last 30 days is at all representative of an average month for Kirk and Option Alpha, then taking every trade that Kirk takes in the same size and fill prices should net you about $2,124 per month, and about $25,000 per year. This is less than half of the median household income in the United States. Take another $1,188 off that yearly income for your cost of an Option Alpha Pro membership.

While having a positive expected value short-term trading strategy in financial markets is an impressive feat in itself, it’s clear that Kirk couldn’t make a living trading alone without drastically altering his trading style, size, or frequency.

In addition to their free membership, Option Alpha has two paid membership tiers: Pro and Elite. Here is the site’s breakdown of each tier: 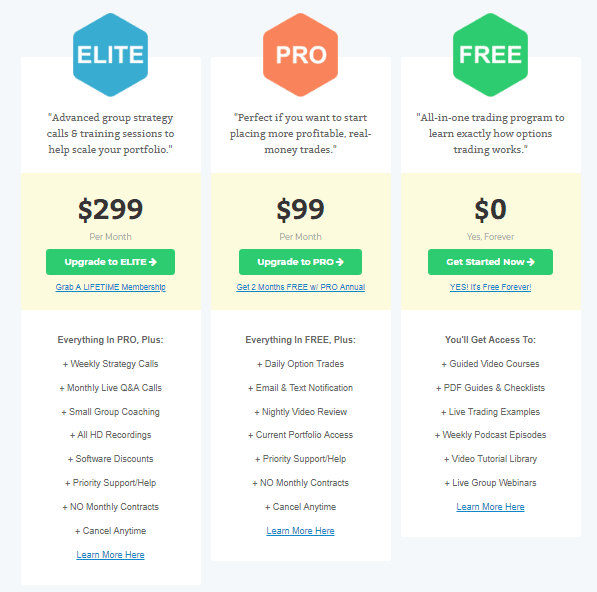 In addition to their monthly subscriptions, Option Alpha sells lifetime licenses to their web-based tools like backtesters, strategy optimizers, and scanners. Here is the breakdown of the licenses they sell: 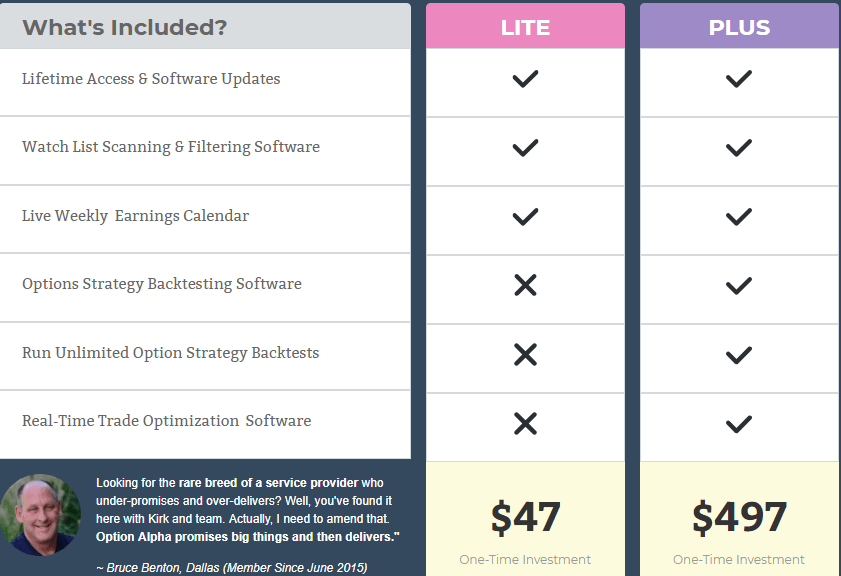 Kirk’s philosophy when approaching the option markets is similar to that of Tastytrade. This philosophy states that implied volatility is generally overstated, so being a net-seller of IV is a positive expected value trade. To put it simply, traders like Kirk and Tom Sosnoff of Tastytrade are essentially permanently short premium. This approach falls under the “income trading” category.

Strategies like this one are quite controversial in the trading world. Selling premium is often referred to as “picking up pennies in front of a steam roller,” as your winning trades, while much more frequent, are small wins, while your losing trades are substantially large losses.

Many other options training services and blogs have criticized this method of trading. A competing options training company called SJ Options have produced a number of critical pieces against premium selling. Their most popular video is about famed premium seller Karen the Supertrader. In the video they explain the statistics behind her trading style, coming to the conclusion that her bust was pretty much inevitable.

On the other hand, there are plenty of advocates for premium selling strategies. The most popular being Tastytrade, which has massive infrastructure in the form of a brokerage and financial news network behind them. Kirk has plenty of case studies on his website as evidence of the strength of his strategies.

While most trading services have nothing proprietary about their strategy, the difference between them and Option Alpha is the presence of a prominent financial news network dedicated to promoting this very strategy. You see, the Tastytrade network has dozens of shows dedicated to selling option premium. Shows like Good Trade Bad Trade, Bootstrapping in America, Options Jive, The Skinny on Options Data Science, and dozens more go extremely in-depth in all departments: trade ideas, data, and training. And it’s all free.

Compare this to your average small-cap day trader’s services. There aren’t many free resources teaching that trading style and giving out free trading ideas on a daily basis, which creates a gap in the market that these traders can fill.

Some value can definitely be gleaned from Kirk’s daily market commentary due to his vast experience in finance but I was left disappointed. I expected a sophisticated, nuanced view on current themes in the market, and how Wall Street will react to certain events, but instead, much of his commentary seems shallow. “I think Facebook is great, they’ll go up after earnings. Wow, look volatility is expensive” is a typical trade analysis you’ll hear from Kirk. Much of the commentary in his member updates are more heavily weighted towards technical analysis, using fundamental catalysts to explain the price moves.

A typical trade commentary from Kirk looks like the following:

While I’ve been a bit critical of Option Alpha and Kirk Du Plessis throughout this review, this doesn’t mean I don’t see any value in their services, just that I think they’re flawed. It’s important to remember that Kirk is a transparent, consistently profitable trader, a very rare thing in this trading education industry. Many claim to be profitable, but few document all of their trades, win or lose, publicly. Kirk and his team deserve massive credit for that.

My main gripe with Option Alpha is that, if you were to follow Kirk’s trades, it would only be side income for you, especially given that you’re probably trading in smaller size than Kirk. Taking into account that you’ll only clear a small amount post-tax, and you have to pay for your Option Alpha subscription, one has to wonder what their hourly rate comes out to when trading this style.

With that said, I admire Kirk’s marketing ability, honesty, and most of all, his ability to actually maintain an edge in trading financial markets. A subscription to Option Alpha isn’t for everyone, but there is certainly a demographic of people who will steadily grow their accounts alongside Kirk and the community.