Dekmar trades is a day trading chat room and education service that appeals to all different styles of traders. Dekmar Trades uses a mix of chat rooms, educational resources, and traditional trading tools to help traders learn and trade strategically. Read this review to learn how Dekmar Trades could give you an edge in the market.

Dekmar Trades takes an unusual approach as a day trading platform, mixing chat rooms and educational resources with traditional trading tools like stock scanners to help traders learn from other traders rather than simply make trades on their own. The platform is largely focused on intraday momentum trading of penny and low-priced ($20 or below) stocks, which has limited appeal for many traders but can be ideal for those willing to accept greater risk. However, the educational tools on the site, in particular the video tutorials, can be a good investment for traders of any style who are looking to improve their strategies. 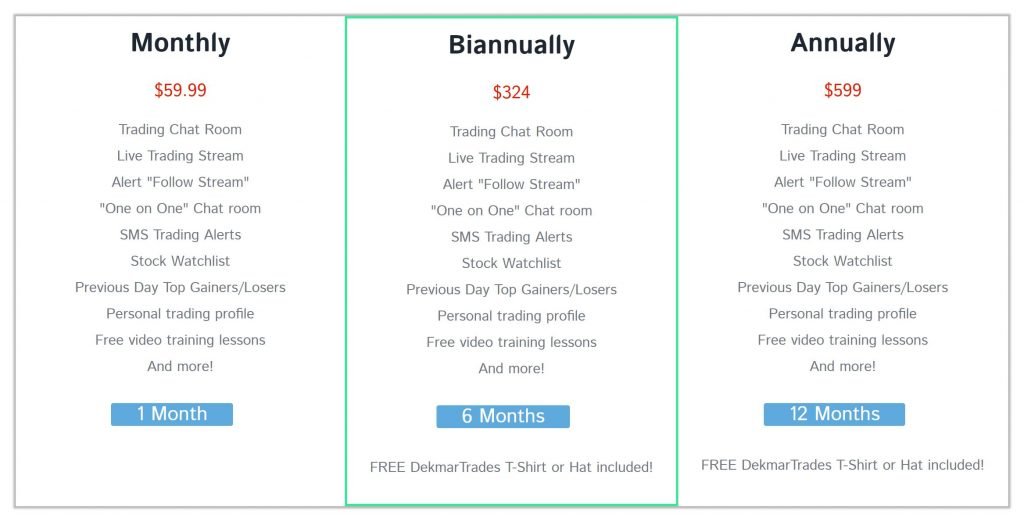 Dekmar Trades also offers a series of trading scanner code sets, built on top of the Trade Ideas scanners, that can be purchased for additional one-time fees. Note that you will need to purchase a subscription to Trade Ideas in order to use these code sets. The Pre Market and Post Market scanner code sets, which are useful for identifying up- and down-gapping stocks or stocks with momentum after market close, cost $399. The more substantial Live Market scanner code set costs $599 and is useful for identifying breakouts, reversals, and top gainers and losers.

One of the best features of Dekmar Trades is the video library, which contains hundreds of short, 10-20 minute videos narrated by the founder’s platform, Sean Dekmar. The videos cover a wide range of topics related to momentum trading, minimizing risk, and how to identify different types of setups. In addition, Dekmar uses his own trading experiences as teachable moments, frequently highlighting individual profitable trades or recapping successful trading days.

The videos can be difficult to get into at first since most of them involve simply looking at Dekmar’s trading screens (primarily Trading Ideas scanners) while he narrates his thought process, but with some attention they are quite informative. Despite the screen clutter, Dekmar is relatively good at breaking down the indicators he is using and explaining complex topics in a way that is easy to take to heart. The library can be searched via a text box if there is a topic of particular interest, or it can be filtered into trading recaps and topic-specific lesson videos.

The chatrooms sit at the center of Dekmar Trades as places where traders can trade ideas, alert each other to potential momentum trades, and ask questions. There are four chatrooms – Alerts, Short, Profits, and Swing – plus a Public chatroom for general discussion and social commentary. The division of these chatrooms helps with focusing in on a particular trading strategy while also allowing for keeping an eye on how other traders are faring.

The chatrooms are surprisingly orderly and explanatory, thanks in large part to Sean Dekmar’s involvement. Dekmar himself is constantly adding notes to each of the chatrooms throughout the trading day, pointing out potential setups and making trading suggestions while clearly and quickly explaining his thought process to keep the chatrooms educational. Dekmar and the majority of users writing in on the chatrooms are also highly encouraging, which can make the platform more engaging and open for questions.

The chat rooms aren’t as active as Investors Underground, but they are still pretty active. 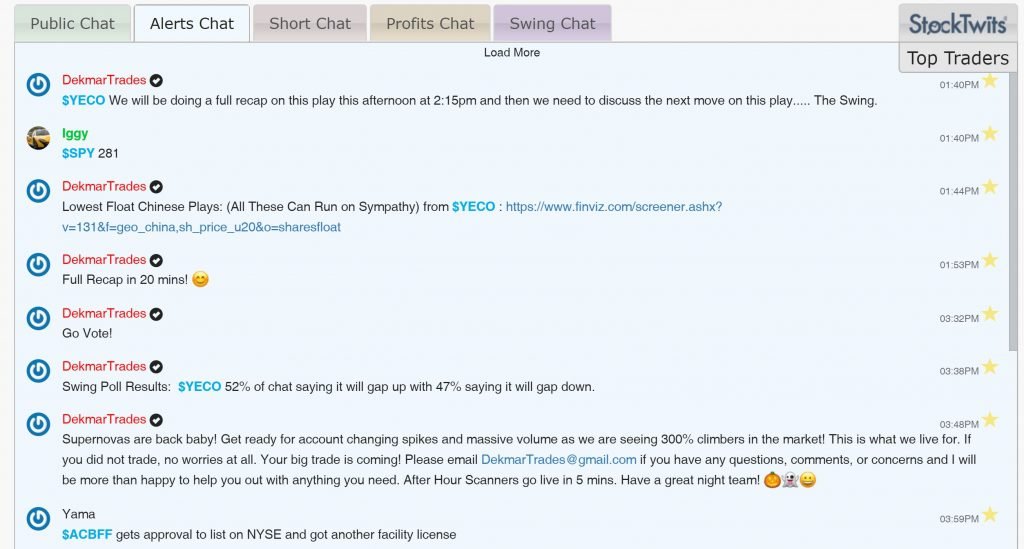 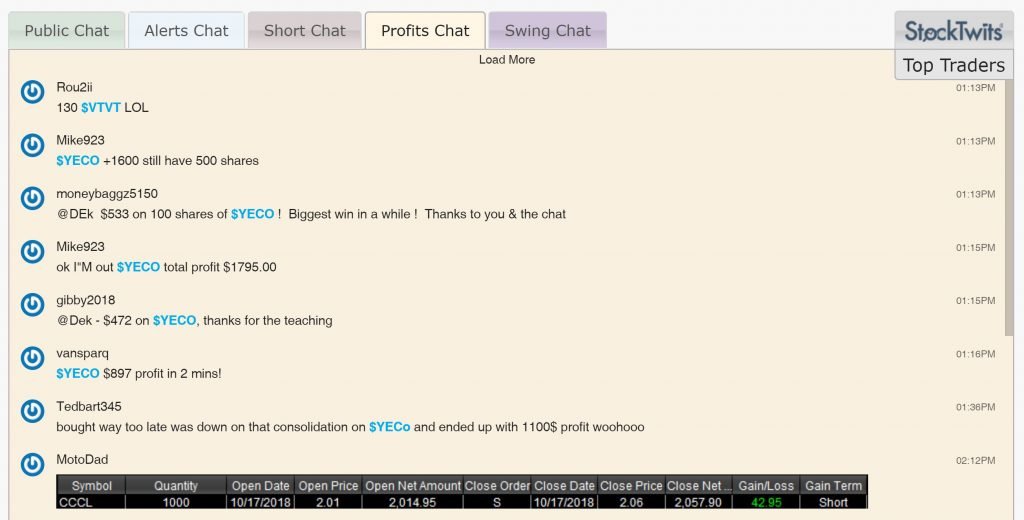 Dekmar also keeps a running watchlist, which is easily accessed from any of the chatroom windows. Clicking on any of the equities included in the watchlist opens an in-window candlestick chart that offers a surprising amount of customization. More important, the charting window allows for rapidly comparing two equities’ charts.

Within the chat boxes, hovering over any tagged stock symbol brings up a daily candlestick chart for quick reference. A minor inconvenience for traders who are not constantly checking the chat windows is that they have to be popped out into new windows in order to see beyond the ten or so most recent messages.

The real thing that sets Dekmar Trades apart is not so much the resource library or chatrooms – which are themselves impressive – but rather the trading strategy advanced by the platform’s founder, Sean Dekmar. Dekmar focuses on momentum trading of low-priced stocks, often trading penny stocks, that comes with relatively high risk but potentially huge intraday movements that yield price changes in the tens to hundreds of percentage points. Although many day traders look down on trading these stocks because of their risk, focusing on these stocks has clearly worked for Dekmar himself and the profits chatroom strongly suggests his strategy transfers well to other traders who follow his alerts and suggested setups.

Trades aside, Dekmar Trades is an incredibly powerful resource for day traders interested in incorporating swing trading into their strategies. The video library hosts a huge archive of detailed lessons about potential setups and pitfalls to watch out for, with numerous examples from real trades that Dekmar himself has made. Simply following the chatrooms can also be instructive, and the encouraging community that the platform has cultivated makes it inviting for traders to ask questions about setups that they are unsure about.

What Type of Trader is Dekmar Trades Best for?

Dekmar Trades is best for any trader who wants to make momentum and swing trading a part of their trading strategies. The chatrooms not only create a social atmosphere for trading, but also allow traders to exchange trading ideas in real time and report back on which setups worked and which did not. In addition, while Dekmar’s alerts focus on low-priced stocks with high risk and reward potential, many of the same lessons about evaluating momentum setups and limiting risk in the event of a failed trade apply throughout the stock market. Moreover, the subscription cost is an incredible deal for beginning day traders who can take the video tutorials to heart to improve their own trading abilities.