A Complete Guide To ConnorsRSI

ConnorsRSI is a technical analysis indicator developed by Connors Research that aims to quantify momentum in prices. Essentially, it improves upon the Relative Strength Index (RSI) originally developed by Welles Wilder by using a short-term reading of RSI, in combination with a trend quantification indicator.

ConnorsRSI utilizes three components in it’s calculation. Those are:

The indicator takes an equal weighting of each component.

Most trading strategies fall into two categories: trend following/momentum, or mean reversion. Most oscillator indicators tend to cater to one style or the other, however, ConnorsRSI has application for both trading styles.

Typically, the style you trade using ConnorsRSI should be based on whether the stock is in a strong trend, or mostly trading in a range.

For trending stocks, one should use the ConnorsRSI as a momentum indicator, and not try to fade extreme readings in direction of the trend, and one should instead find counter-trend pullbacks.

For stocks trading in a range, one should use ConnorsRSI as a mean reversion indicator 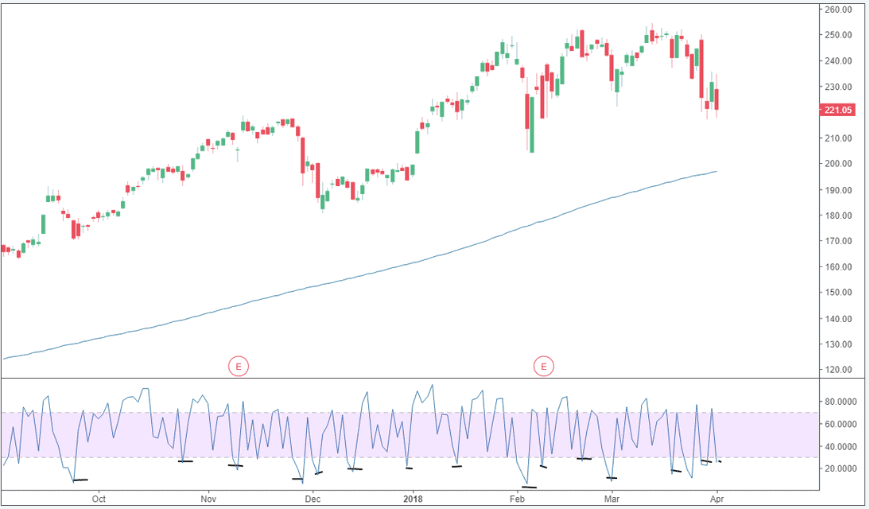 See in the example above, which is a strongly uptrending stock, trying to apply a mean reversion strategy would serve as very unprofitable and frustrating. Instead, a better strategy would be to use ConnorsRSI to buy pullbacks within the uptrend, using it to find weak prices which would serve as attractive buy points.

See the chart below for some examples of buy points. In this case, we buy when the reading of ConnorsRSI on the daily chart closes below 30. To produce stronger, and less frequent trading signals, you can adjust your system to buy when the ConnorsRSI closes below 20, or 15 if you want less trades. 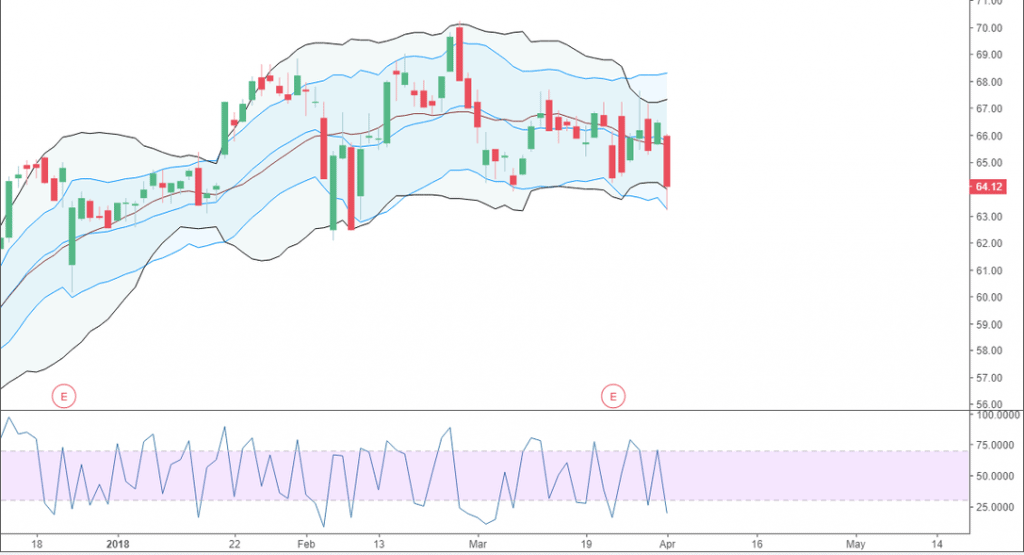 In contrast to high flying uptrending stocks like the example above, many stocks trade calmly in a range, allowing us to fade moves at the top or bottom of the range.

Rather than buying pullbacks in the trend, in this case, we wait for a stock to touch the top or bottom of its range, and fade the move. For example, a stock trading in a range between $20 and $25 closes at $24.85. This would be a good price to enter a short position to fade it back to the middle of it’s range. 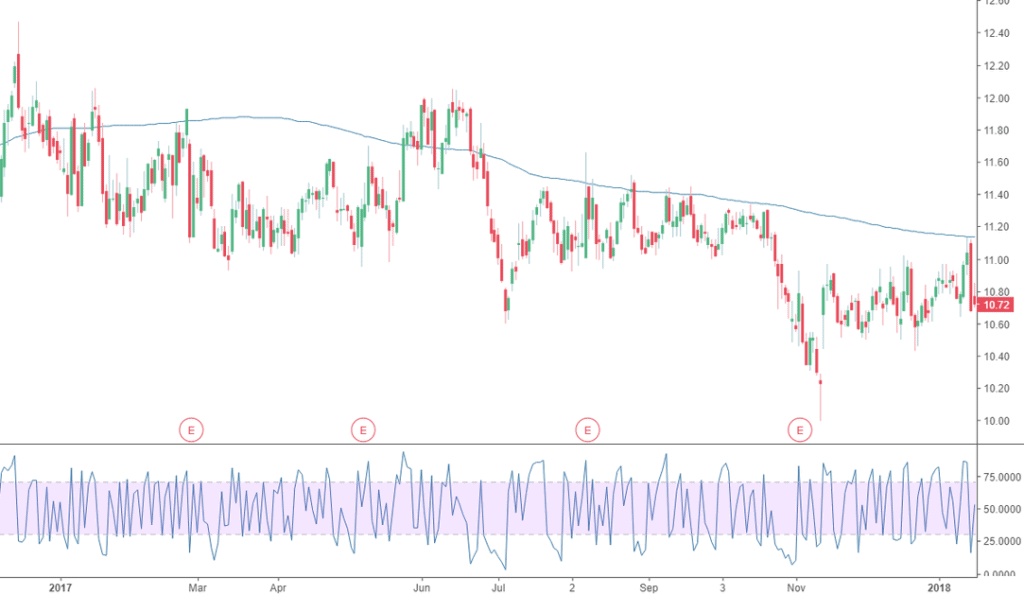 See the chart above. The stock is, for the most part, trading in a range between $10.80 and $12.00. Applying a trading strategy to a stock such as this would be as simple as wait for an overbought signal towards the top of the range, and an oversold signal near the bottom of the range. 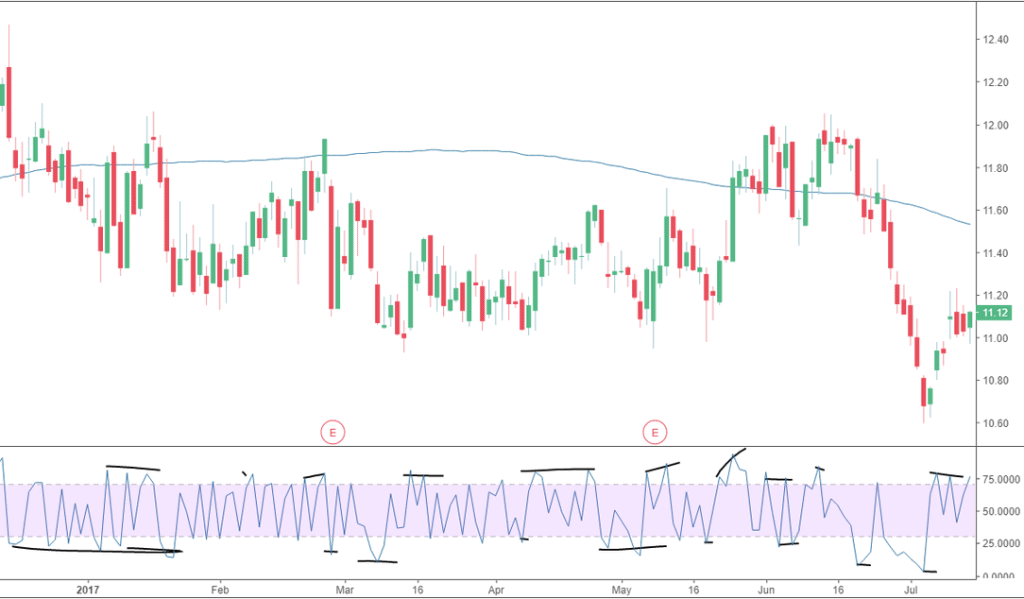 Here is a chart showing some trade opportunities using a mean reversion on the example above while it’s trading in a range.

While ConnorsRSI can be utilized effectively in trading a trend pullbacks system, there are better indicators to quantify a strong trend within a stock. Combining the two indicators can lead to better results, and keeping you away from discretionarily identifying trends, allowing your eyes to trick you.

The Average Directional Index (ADX) is an indicator that quantifies the strength of a trend. Generally, readings below 30 indicate a strong trend, with a rising ADX indicating rising trend strength. ADX does not tell you the direction of the trend, just the strength. 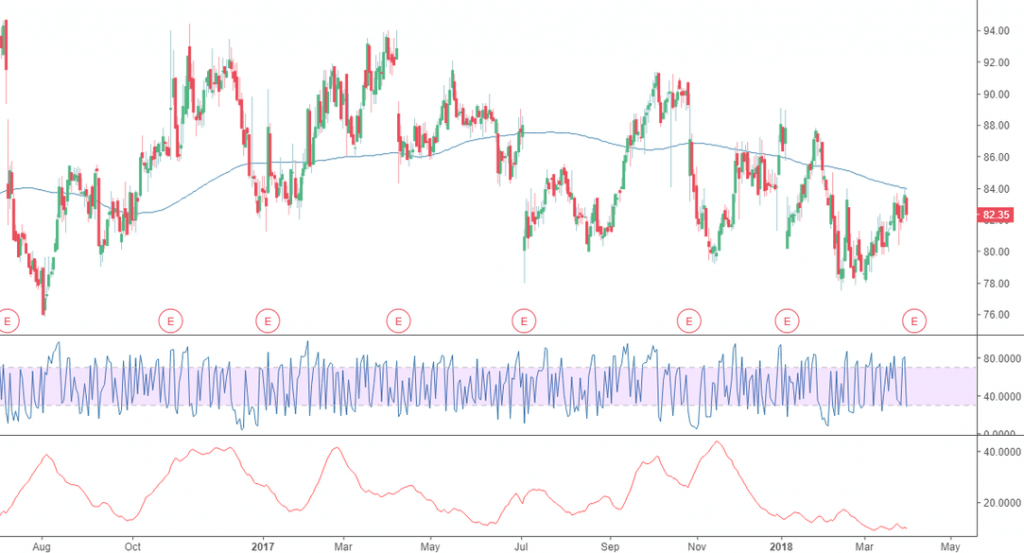 Using a stock screener, we can search for stocks with high and rising ADX readings and opt to trade them instead of trends that we identify discretionarily.

See the above example. The downward trend is extremely strong, we can choose to sell short when we get a high ConnorsRSI reading. 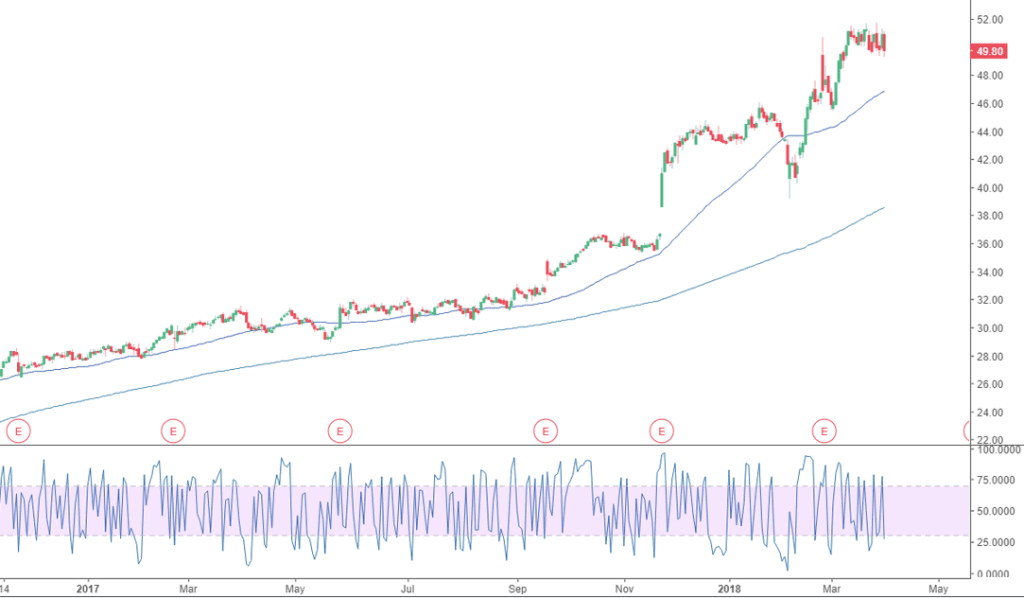 While ConnorsRSI is an excellent tool for mean reversion trading, it isn’t the best tool for identifying the best opportunities.

Bollinger Bands crossing inside the Keltner Channels (“The Squeeze”)

“The Squeeze” is an indicator developed by trader John Carter. It signals when a market is extremely quiet. John uses it to identify breakout opportunities, but the same tool can be used to trade the ranges of those quiet markets that John looks for. 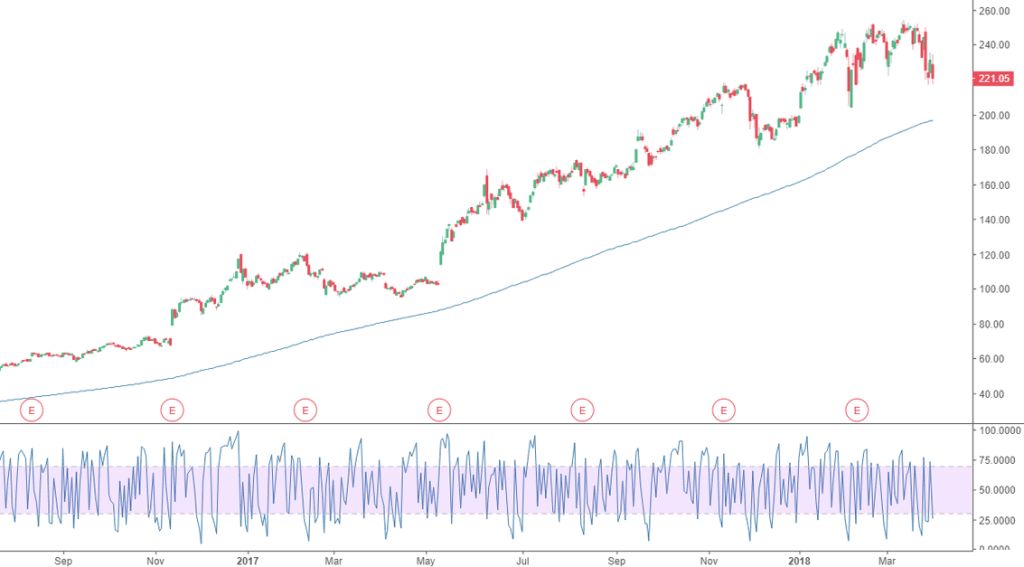 The same way that we use the Average Directional Index (ADX) to identify strong trending markets, we can identify range-bound markets. It’s as simple as using a stock screener to identify very low and declining ADX readings. 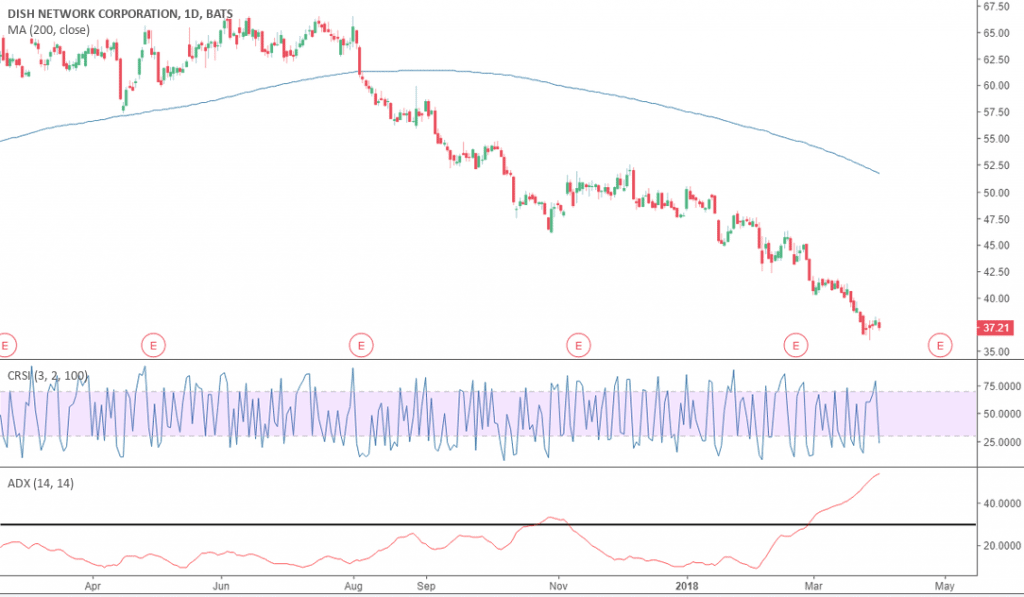 See the chart above, with it’s low and declining ADX level.

ConnorsRSI is an extremely versatile indicator, replacing the original RSI for many. The indicator developed by Connors Research can be used for trading trending markets, range-bound markets, and to identify overbought/oversold levels.

There are countless systems one can devise using ConnorsRSI, and most would be best served by combining the use of other indicators to generate the best trading signals.