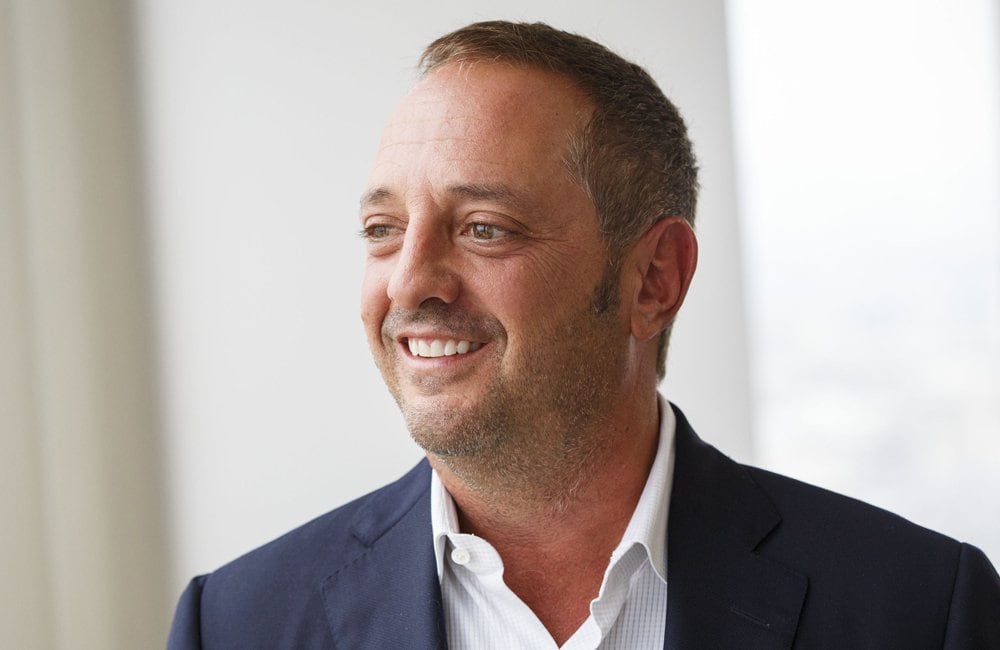 Andrew Left is a famed short seller, who publishes his short ideas through his website CitronResearch.com, formerly known as StockLemon.com. Citron’s main goal, according to their website, is “identifying fraud and terminal business models.”

Who is Andrew Left?

Plastered on the top of Citron’s website, it’s clear that Left is proud of the reputation he garnered on Wall Street.

Left is an outcast on the Street by default, living in Beverly Hills. He got his start in finance through a cold-calling job at a  shady commodities brokerage, for which he was sanctioned by the National Futures Association, and in their words he “made false and misleading statements to cheat, defraud or deceive a customer in violation of NFA compliance rules.” After this inside knowledge on how securities promotion works, he began shorting stocks pushed by “boiler rooms,” and later, internet bulletin boards.

This lead to the creation of StockLemon.com, where Left published reports on the company’s he  was shorting. After a rough divorce with his ex-wife, he decided to start anew with Citron Research.

Left has garnered mainstream exposure due to his firebrand nature. He makes sweeping, confident assumptions about the companies he is shorting and is known for simplifying his findings. While the typical Wall Street research report is long, filled with jargon and metrics, Citron’s reports are short and use layman-language. This is by design.

Left’s success at promoting his positions makes sense when put into perspective by a Bloomberg tech. “You’re our best guest, our most controversial guest,” he told Left.

In 2015, Left announced he was short Valeant and accused them of channel stuffing, calling them the “Pharmaceutical Enron” in his report on the company. This lead to a saga of reporting on the inner workings of Enron by the wider mainstream media, one New York Times op-ed was called “Is Valeant the Next Enron?,” while a Business Insider article was called “Valeant is not Enron, It’s WorldCom.” The tide was shifting for Valeant.

Left struck at the perfect time, in the midst of the controversy surrounding Martin Shkreli’s price-hike of AIDS drug Daraprim. Left tactfully used Shkreli as an example, citing that while the media is distracted by the “Pharma Bro” hiking the price of one drug, Valeant had been doing it for dozens of drugs for years.

Most of the financial media credits Left for bringing Valeant down. Here are just a few articles:

This is just a sampling of the dozens of articles crediting him for Valeant’s burst. 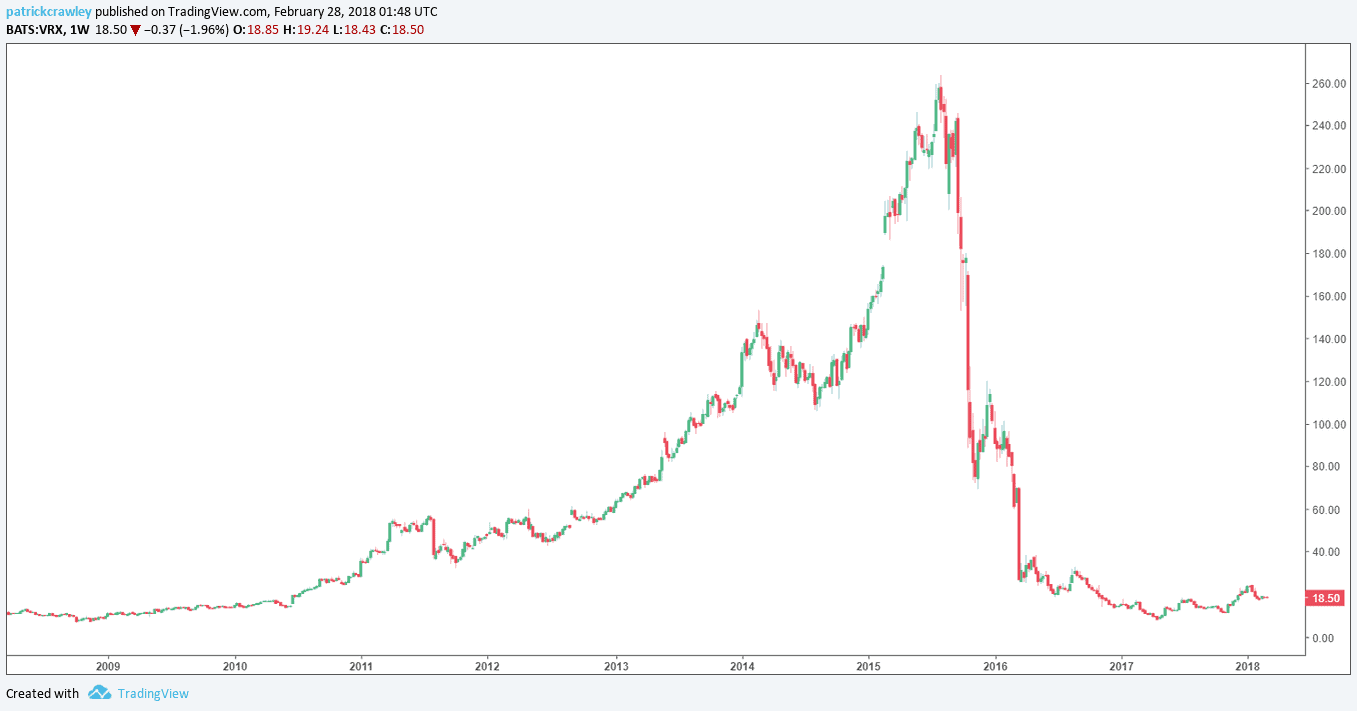 Many would agree, Left’s Valeant short was pretty popular. The media immediately ran with the story, and although Valeant was a Wall Street darling before the report, their reaction to the controversy speaks volumes. Left doesn’t always hit it out of the park like he did with Valeant.

In October 2017, Left published on the Citron website that he was short Shopify, and the report made lofty accusations. The title of the report being “THE HOTTEST STOCK ON THE NYSE IS … A COMPLETELY ILLEGAL GET-RICH-QUICK SCHEME (WITH A GOOD SOFTWARE PLATFORM).”

The report compares Shopify to Herbalife, because the majority of Shopify’s clients do not make a profit, and because of Shopify’s affiliate program. It goes further to claim that Shopify has broken multiple FTC regulations with their marketing language and behavior.

The report displays YouTube videos of Shopify affiliates pushing the “become a millionaire” dream, like the image below. 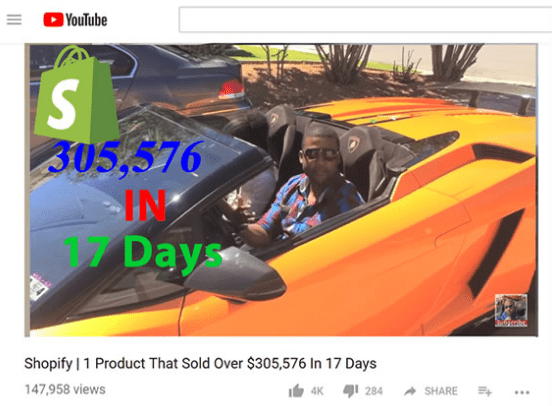 After the initial report, Shopify’s shares dropped 12% in one day, however, the stock quickly bounced back. The best way to see how Wall Street viewed Citron’s report is how the stock reacted. Although it initially took a dive, investors happily bought the dip, crushing Left’s short position. Presumably, the report made trigger happy investors, as well as momentum short sellers, sell the stock, and made Wall Street take a closer look at the claims. Unlike the case of Valeant, where his report tipped Wall Street off to actual fraud within the company, the market voted in favor of Shopify on this one. 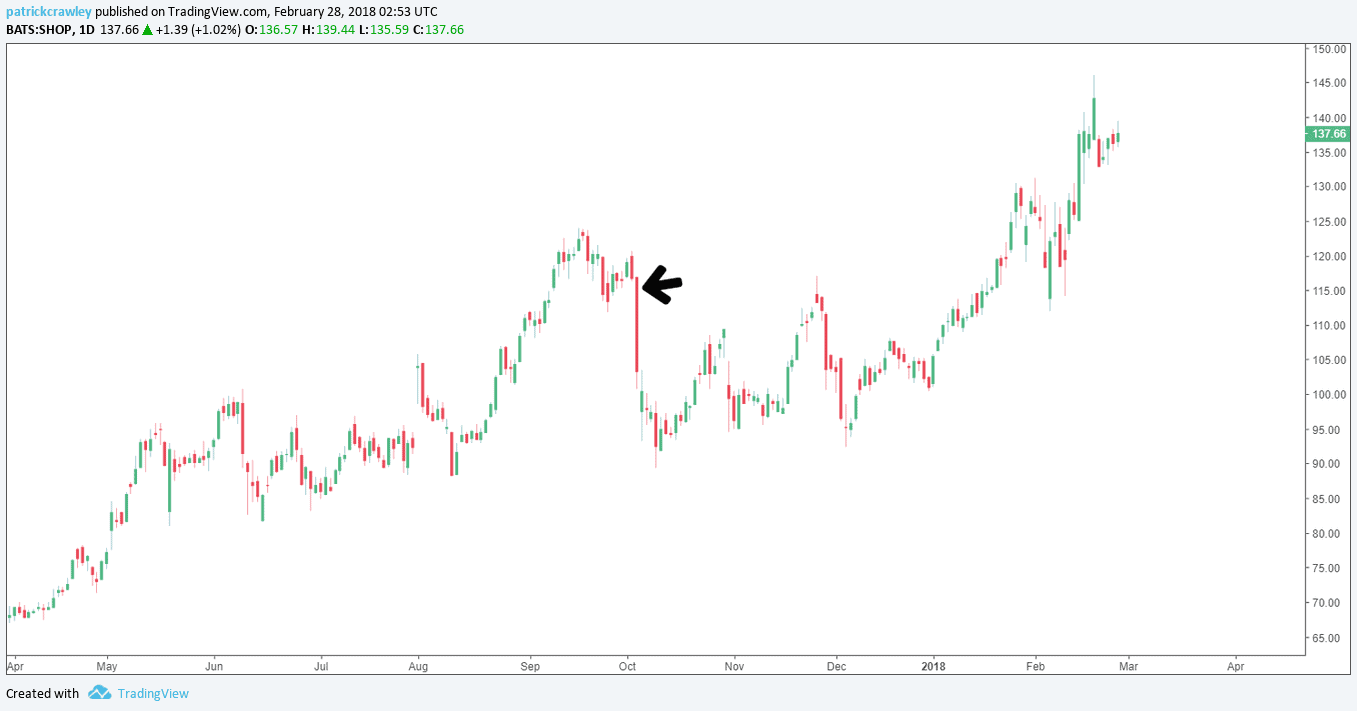 Additionally, there was a multitude of responses criticizing the Citron report like the ones below.

“First, we view the comparison with Herbalife as clearly misleading, as Shopify is not a multi-level marketing company… Second, and more to the point, our survey of Shopify ads today indicate very few (1 out of 20) contain the word millionaire, whereas the vast majority of the marketing campaigns are focused on easy online store set-up, building a brand, selling on Facebook, or creating an online shop. In fact, in order to find references to “millionaire ads,” even the short report suggests needing to search Google very specifically with the keywords “Shopify Millionaire” to uncover such ads, since they are not very apparent otherwise… Third, the short call on valuation is based on the long-standing view among some investors that the non-subscription part of Shopify’s revenues (Merchant Solutions) deserves a lower multiple, since it is largely volume-based commissions for payments and other “back office” functionality rather than “core” e-commerce functionality. We agree that this part of Shopify could be valued differently, however, we would note that both segments of the business are somewhat interdependent, and represent a fixed and variable component to revenues for a more complete end-to-end platform offering that align Shopify’s interests and incentives with their customers.”

“The way that he is spinning it is unfair and incorrect, it’s laughable-all smoke and no fire.”

Activist short sellers are often accused of trying to manipulate the market, however, few get more flack than Left, who is routinely criticized and sued by the companies he shorts. Some make the case that he is a sort-of market vigilante, someone who identifies fraudulent companies and informs investors.

Whichever is the case, one thing that can be said is he is very successful at what he does. Short sellers, and short activists especially, should take notes on what he does. Rather than holding 3 hour presentations a la Bill Ackman, Left goes the route of the catchy headline, with the report being easy enough for the layman investor to understand. Ultimately an activist wants to make their thesis as widely available as possible, so it is difficult to argue with his methods, from a purely practical point of view.