In this article, we review Tim Grittani’s Trading Tickers DVD. The DVD is mostly about strategies Tim uses to trade OTC stocks, strategies which Tim himself doesn’t use as much nowadays, now that the OTC markets have calmed down. This review aims to determine whether or not this DVD is worth your money and time.

Trading Tickers is a trading course created by day trader Tim Grittani. Grittani rose to prominence due to his amazing feat of turning $1,500 into over a million dollars in just three years. Grittani is one of Timothy Sykes’ famous “millionaire students.”

In this review we’re going to look over Grittani’s trading course Trading Tickers and try to determine it’s value for the money it costs.

Who is Tim Grittani?

Tim Grittani is known for being one of Tim Sykes’ “millionaire students” who turned $1,500 into over $6 million dollars. Tim blew up multiple small accounts trying to teach himself to trade, then he found penny stocks through Tim Sykes. After internalizing Sykes’ material, Grittani mostly shorted OTC stocks that were victims of pump-and-dump schemes. While shorting OTCs is still part of Grittani’s strategy, he has said that the OTC market has cooled down and he trades much more NASDAQ stocks these days.

Grittani and Sykes appeared on Fox News during the massive popularity of the movie The Wolf of Wall Street, when penny stocks were a hot news item.

Grittani shares all of his trades on trading journal site Profit.ly, which is run by his mentor Tim Sykes. His profile’s name is kroyrunner.

The following is his equity curve: 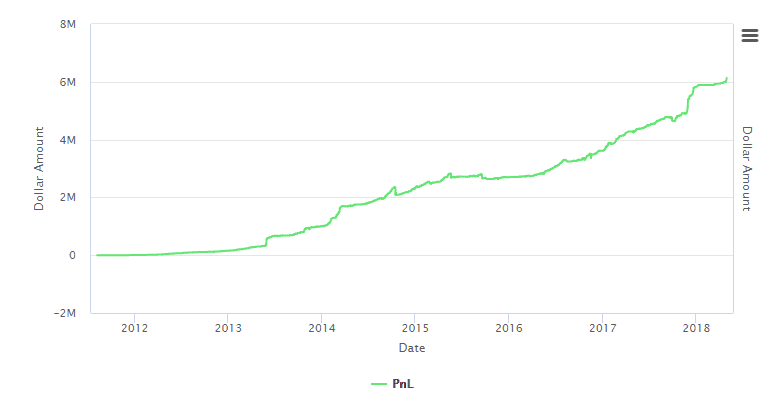 With very few draw downs, one cannot be blamed for remaining skeptical of his claims, as these are not audited brokerage records, but simply trading journal entries. Tim does upload many of his losing and winning trades to his YouTube, so while you cannot solely take him on his word, he is more transparent than many teachers in his industry.

Tim’s trading philosophy can be summed up as “trade the ticker, not the company” (originally a quote from Nate Michaud of Investors Underground). Trading Tickers is roughly 16 hours in length, and goes into detail regarding Tim’s various technical trading strategies.

Though each person’s mileage may vary when trading Tim’s strategies, this course is all meat and potatoes. Many courses try to pack as many hours as they can to make it look like they’re giving you value. This often means spending several hours talking about trading psychology, their personal trading journey, and other introductory maintenance that is either covered in 1,000 other places, or doesn’t really help you become a good trader. I estimate that more than 12 of the 16 hours in this course are direct strategy education. It’s Tim teaching you about a strategy, live trading it, then explaining what he did wrong, what he saw, and what made him take each action throughout the trade.

This aspect of Tim’s trading style makes me appreciate Tim as a unique trader. I’ve seen plenty of trading courses and few have even mentioned using stock promotions as a source of trade ideas, but Tim goes as far as teaching you some really clever ways to find the promoters in the first place.

Because Tim’s trading revolves around OTC pump-and-dump scams, Tim tracks down the stock promoters and finds ways to profit from them on the long and short side.

In the course Tim walks you through his methods of finding promoters which first involves simply setting up a throwaway email, and searching Google for “hot penny stocks,” or “penny stock picks.” He then signs up for the newsletters of the sites that are promoting via AdWords, as it shows they’re more serious. After that, it gets a bit more sophisticated. He uses a website called YouGetSignal.com to do a reverse IP Domain lookup on the stock promoters that he’s signed up for. The search tells you other sites that are located on the same server as the site you entered. He does this because many stock promoters run multiple email lists, and some alerts are sent earlier than others.

After compiling a large list of penny stock promoters, Tim essentially backtests them by checking how their past picks have performed. He details his technical trading strategy for trading stock promotions, and notes that stock promotions don’t happen that often, only a couple of times per year.

Here’s a few principles he emphasizes when taking these trades:

When trading penny stocks, most strategies are based around breakouts. Most of the time, penny stocks are only worth trading when they’re breaking out, as they’re usually illiquid and trading in a range otherwise.

A huge part of Tim’s trading strategy is based on trading penny stock breakouts, both trading with the breakout, and fading the breakout. 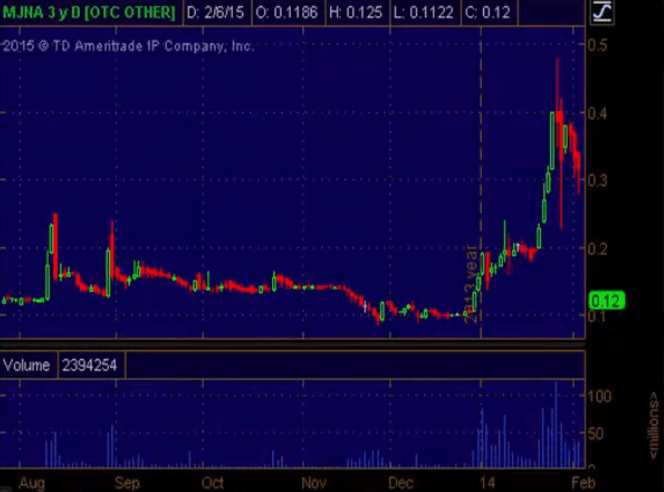 This is a basic bread and butter setup from Tim. It involves a stock breaking out of a long-term range, consolidating for a few days, then breaking even more aggressively to the upside. This setup is taken on a daily chart.A few principles Tim uses when trading this strategy is: 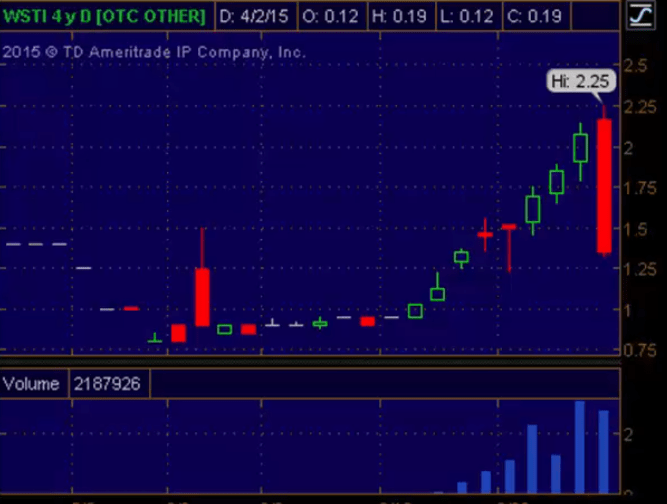 In Tim’s opinion, most OTC breakouts, especially the massive ones, are based on hot air, being pumped by stock promoters or a similar shady character. In his mind, it’s only a matter of time before the stock plummets back to or below it’s pre-breakout price.

Being aware of his belief that most OTC breakouts are unmerited, he still sticks to his principles of trusting the chart. The chart setup will be the judge of any of his trades, no matter how scammy a company is, or the fact that he knows a large move is only due to a stock promoter.

One of Tim’s favorite plays is an overextended OTC breakout on the daily chart. He judges this based on the breakout point, how many consecutive green days the stock has experienced, and how large the percentage move was relative to the stock’s history. However, Tim is not a top-picker. He waits for the momentum of the stock to shift

Here’s a few principles Tim sticks to when fading breakouts:

Usually when you hear that a trader is affiliated with Tim Sykes, you get prepared to see Lamborghinis, and lots of motivational, “trading psychology” type material that fills a bulk of the course. This couldn’t be less true of Tim Grittani. Grittani uses no hype and is not a dream seller. Like I mentioned earlier, Grittani’s material is all meat and potatoes.

I appreciate Grittani’s specialization in OTC stocks. I’m of the opinion that there are too many courses on momentum day trading. It’s a pretty basic concept, use some chart patterns to trade the stocks that are showing up on all your scans. Grittani’s course, on the other hand, is merited. He operates in a niche that there is little information about and justifies his course price because of this.

While I loved the course, Grittani says himself on his blog that he doesn’t trade OTC stocks that much anymore because the market has cooled down a lot. He mostly trades more liquid NASDAQ names, and nowadays is trading in a style similar to Nathan Michaud from Investors Underground. It may be the case that Grittani is too big for the OTC markets now, but, unless you intend to trade OTC stocks, an asset class that the author of this course has exited himself, I would use caution when buying a product so targeted at OTC stocks.